Fr. Nkandu Idol is a Zambian Diocesan priest ordained for the Catholic Diocese of Ndola on December 8, 2013. He was born on January 14, 1981 in the town of Mufulira, Zambia. He did his seminary studies between 2000 and 2008 at St. Augustine’s Major Seminary in Kabwe and St. Dominic’s Major Seminary in Lusaka. After his ordination, he worked the Cathedral of the Catholic Diocese of Ndola as Cathedral curate for five years. Fr. Nkandu holds a Bachelor of Divinity from Urbaniana Pontifical University in Rome and a Licentiate Degree in Patrology from Cardinal Stefan Wyszyński University in Warsaw (UKSW) where he studied from 2018 to 2020. Other qualifications include A Bachelor of Arts Degree in Development Studies from Zambia Catholic University and a Diploma in Religious and Philosophical Studies. He is currently teaching in St Benedict Diocesan Seminary in Mufulira, Zambia and is also the Diocesan Vocations Director for the Catholic Diocese of Ndola.

Since Christianity has a long tradition, it is important that the Church of today learns from the rich past. Topical issues like Church hierarchy and ministries in the Church cannon be properly understood without looking back to the early Church. This work specifically looks at “Church Ministries in the First Century”. By Church Ministry we refer to the office of apostle, bishop, presbyters, deacons, teachers and prophets. The paper explores these ministries in the context of the New Testament Books and in the Christian writings from the first century. This work is particularly useful for inter alia three reasons. Firstly, the old Church ministries are, once again, being discussed; there are some simplified opinions in this matter. Secondly, this work can help people who face problems of order and authority in the Church. Thirdly, it can be considered as a small contribution to the Synodal Way opened by Pope Francis on 9 October 2021 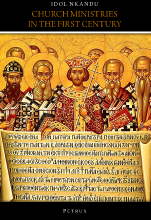 Church ministries in the first century